Last night's concert was very good! I really enjoyed it, and there are a lot of his songs that I really like. He was great, his band was great, the theater building was great, the lighting was great, it was all AWESOME! But even though now I know a bit more why people like him so much, I still think his fans are all rather... well, crazy! hehehe, and that includes my mom! :)

We got there about an hour and a half early so that we could "meet other fans"... My mom had posted on the Leonard Cohen Forum that she was coming with me and her sister, and that she would be wearing red shoes but she thought it was just a joke and nearly didn't wear them, but my aunt convinced her to do it, and she did. And sure enough a few minutes after we got there a lady came up to my mom and said "Do you post on the forum? Are you the one who said she was going to wear red shoes?" And so my mom and the lady started talking. The lady was from Ireland, and was a big fan, she even got her kids into liking Leonard Cohen! She had gone to his NYC concert (and had a picture of him and her at his hotel), and now she came to the Boston one, and she was planning to every concert in Ireland, one in the UK, and another in Lisbon (which my mom is thinking of going to), and one in Barcelona. In other words she's going to nearly every single one of his concerts. Yup, his fans are all pretty crazy! But they have good reason, he really is a great songwriter, and poet. I feel sorry for him though, 74 years old and he has to sing for 3 hours and put up with his insane fans lol, and I think there would be a riot if he was to get married because there are many lady fans who still haven't gotten to propose to him yet, hehehe.

Still, it was a very fun concert, and I enjoyed it and recommend you to go to one of his concerts! HURRAH FOR LEONARD ON A GREAT JOB!!
Posted by fylisfe at 10:47 AM 1 comment:

Feast your eyes on the insanity that is all us Anime/Manga fanatics!! 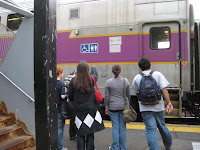 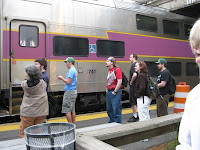 The train station at 6:45 in the morning, only AnimeBoston people would do this!! And everyone there WAS going to AnimeBoston lol :) 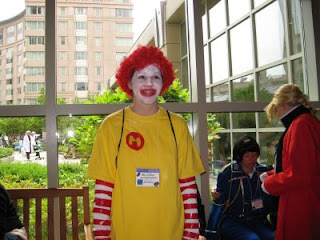 My reaction was:
OMG OMG ITS RONALD MCDONALD!!
WE HAVE TO TAKE A PICTURE NOW!!!
Hmm is that another Ed I see? dun dun DUN! 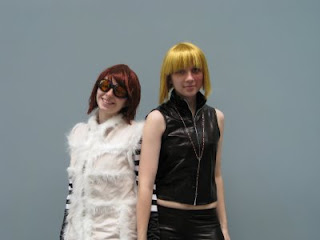 Matt and Mello from Death Note! You girls rock for dressing as them! I was so happy! 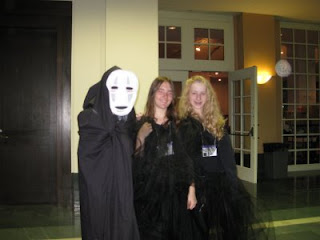 Cool Spirited Away ghost and... some witch girls? idk what they were but they had cool dresses. 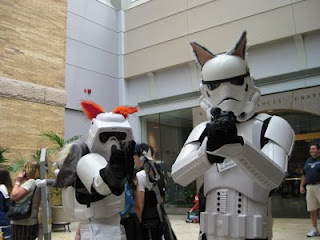 ...They have kitty ears... We all freaked out when we saw them... ADORABLE KITTY EARS!! AND TAILS! THEY HAD TAILS TOO!! KAWAII!! (cute in japanese :)) 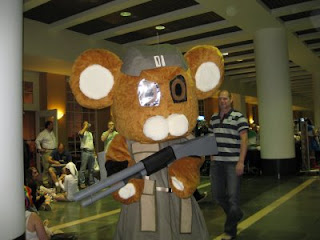 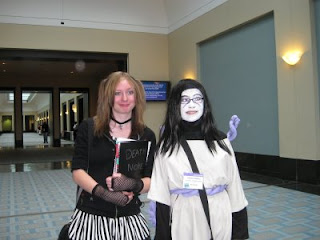 Misa from Death Note, and Orochimaru from Naruto. 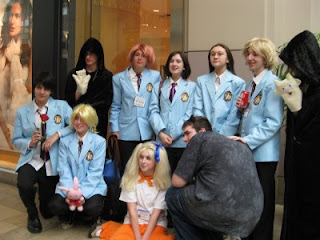 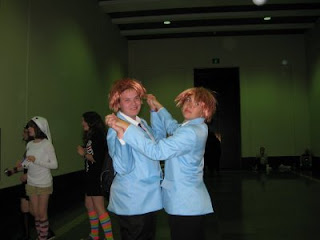 There we go! Now there's two of them! HURRAH Kaoru and Hikaru! 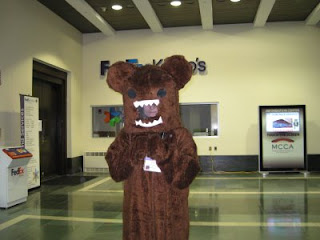 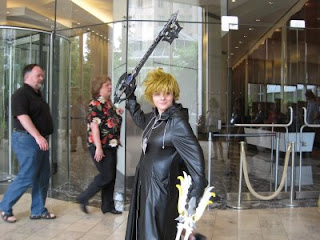 Some Final Fantasy or Kingdom Hearts Video game dude... I don't have any video games so I don't know, I'm video game deprived, always have been. 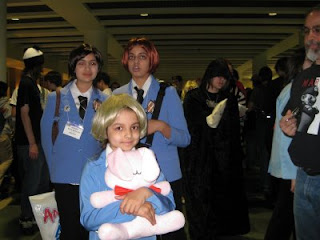 Cute little kid dressed as Honey from OHSHC and her sisters as other OHSHC characters. 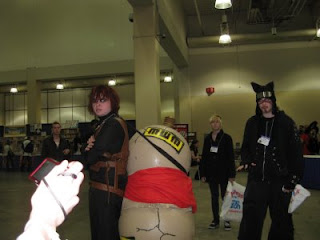 Gaara and Kankuro from Naruto, and Ian's hand! XD 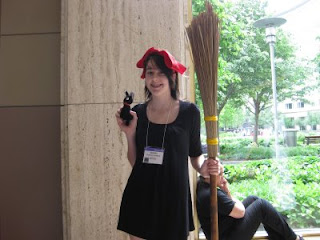 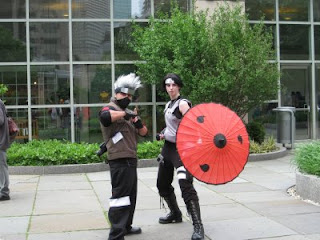 Kakashi and some other Naruto dude! We had to chase him down when we saw Kakashi! 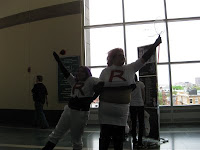 Team Rocket (I'll get a better pic off my friends), 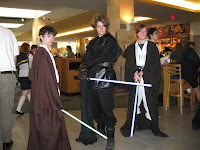 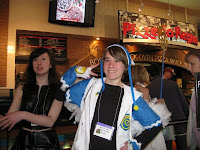 A character from FullMoon (or so I'm told), 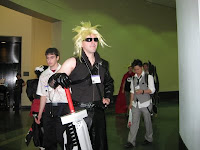 Another video game person..Cloud, I think..
MORE PICS LATER ON!
Posted by fylisfe at 7:03 PM 4 comments:

I'M BACK!! heh...heh...heh....
Yeah... sorry for the lack of posting, I've been busy (more like distracted)
I've discovered lots of things that have been keeping me "busy", hehehe.
Like onemanga.com, and animefreak.tv and I've been busy reading mangas and watching THE NEW FULLMETAL ALCHEMIST!! WOOOT! As well as a new AWESOME anime called Pandora Hearts, which rocks!! ROCKS I TELL YOU! :)
Anyways...
Last weekend I went to the awesome, amazing, supercalifragilisticexpialidocious, funtastic and any other good verb, ANIMEBOSTON CONVENTION!! hurraah!
I went with my friends Ian K, who was L from Death Note, Natalie, she went as a Japanese school girl, and Jen, who went as Kyo (female version) from Fruits Basket or Furuba :).
And I was ED ELRIC! From Fullmetal Alchemist! YAY!
I made a coat and everything! I was even the right height hehehe! (He's short, I mean FUNSIZED, too just like me!!)
Here are some pics!! 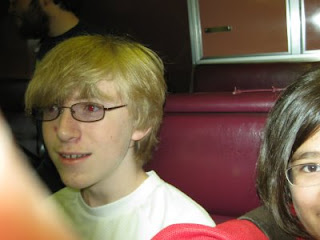 Ian- He was supposed to have a black wig... but I forgot it
(I WAS RUSHED) lol 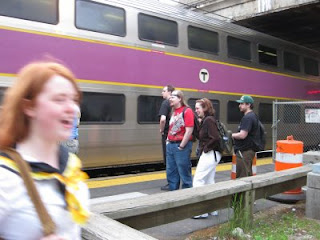 Natalie- You can see she was pretty excited 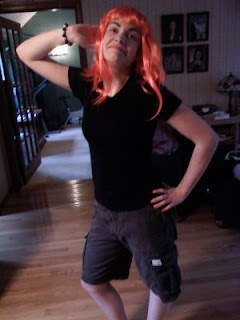 Jen-aka Ookami-chan-aka my F.B.I F.R.I.E.N.D- aka math and anime club and chinese club buddy- I tried to convince her to dye her hair that color but she wouldnt :P 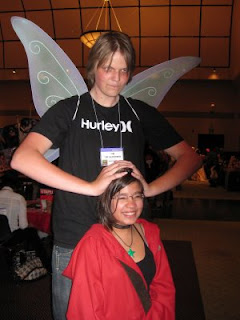 This is me and some reallyreallyreallyreally tall dude!
HE WAS SOOO TALL!!!!
And he had the best reaction to my shortness ever, hehe, he asked how old I was and when I said 15, he screamed" AHHH THERE'S SOMETHING IN THE WATER!!", it was pretty funny! :)
Well,
I'll put more pictures of my coat and of other cosplayers and other stuff later.Now I have to go play with my little baby cousin who came to visit from Syracuse,NY.Her mom, my aunt, my mom and I are all going to a Leonard Cohen Concert this weekend :) !
Posted by fylisfe at 3:07 PM 3 comments: