Today I begin my FIRST day of summer vacation.
I went to school took my last final exam. Chemistry, which was not as horrid as I thought it would be but that might be because I study from 11:3o am to 10:00 pm yesterday, don't get me wrong however it was still rather bad. But enough of that! ITS SUMMER NOW! HUURRAH!! (sigh I only wish the weather was like summer... it's been raining for the past week eck xP )

Now I'm going to go take a bubble bath, and then I am going to R-E-L-A-X!
Tommorrow I might be going to the beach with some friends,on our annual last day of school beach trip. =D

As there is only one more week of school left final exams have begun at my school. Today was a regular day except the last two periods would be for the 7th period exam. I, however, had gym 7th period and since not much is done in gym that you can be tested for we had taken the test on Monday. This left me with absolutely nothing to do for about 2 hours since I had no ride, because Elsa and Ze are in Boston, because Elsa had a surgery on Wednesday. Check her blog for details.
Anyways, that left me with two hours in the cafeteria to use as I wished. So what did I do with my spare time? I watched videos on my ipod and drew. Recently my friend Jen has gotten me re-addicted to Pokemon, which I don't know if it is a good thing or a bad thing. But being re-addicted as I am I decided to draw my own Pokemon. :) I think they came out kinda cute. :) 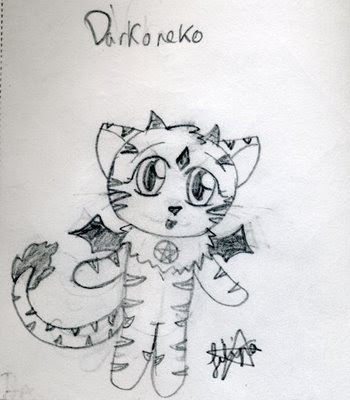 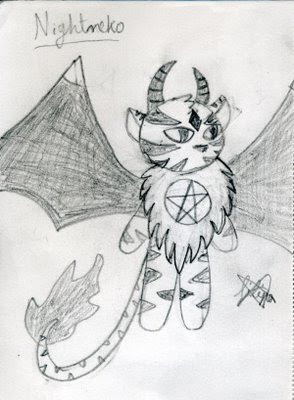 Since I had a lot of time on my hand I also wrote some stats for them.

Nightneko
Pronunciation: Nite-neh-ko
Stats: same as Darkoneko's but awesomer. I didn't have time to write them and I don't feel like doing them right now either. ;P

PS neko is cat in japanese and koneko is kitten
Posted by fylisfe at 6:28 PM 2 comments:

Some Drawings and a rant

These are two sketches I've done recently.
This one was sometime in April-May, it's a witch riding on her broom in the moonlight with her kitty, I was inspired after watching Kiki's Delivery Service for the, I don't know, umptheempth time? hehe. I think she looks cute but that could be just me... :) 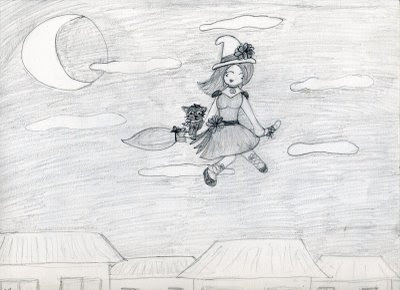 The next one is the most recent drawing I've done, I finished it about 10 minutes ago! hehehe!
It's just a sketch with some characters of this really cool anime I've been watching called Pandora Hearts! You can watch it here. It's amazing I <3 href="http://4.bp.blogspot.com/_Cnk0OMTt4k4/Sicnk617cAI/AAAAAAAAAis/eyptm1oCK28/s1600-h/pandorahearts001cropped.jpg"> 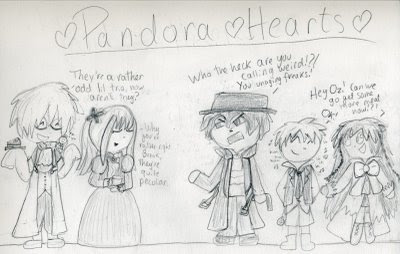 Characters from left to right: Break, Emily(a lil dolly thingy on Break's shoulder),Sharon, Gil/Raven, Oz,and Alice
Break: They're a rather odd lil trio, now aren't they!?
Emily: ya ya!
Sharon: Why you're rather right Break. They're quite peculiar,
Gil: Who the heck are you calling weird?!?! You un-aging freaks!
Alice: Hey Oz! Can we go get some more meat now !?!
Oz: (humming a song) OK!
Posted by fylisfe at 9:45 PM 1 comment: