Tribute to the Greek Gods 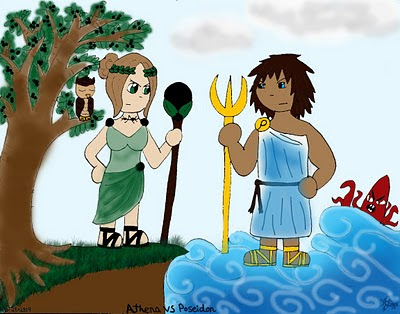 If someone asked me to pick a set of Gods or a God that I wish were absolutely and undisputably real, I would pick the Greek Gods. Now, these guys knew how to have a fun time! I have always had a fascination towards Greek Mythology. I don't really know why, but I love the Greek Gods and Goddesses, they're just so FUN! They're crazy! They're wild! They're definetly far from perfect! I just think having these guys around would make the world very exciting to say the least.
'Kay, so the drawing above was colored on photoshop. I think it came out ok, I need to start fooling around more on photoshop. There are some really cool effects and stuff I just need to practice using them.
Tomorrow, I'm going to color in the drawing of this in my notebook with pencils and I'll post it here to see which came out better.
Below is the inked version, not colored. 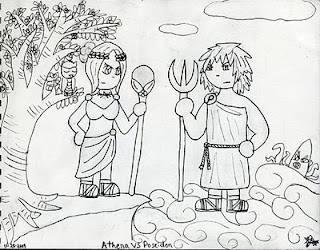 The drawing is of Athena, the Goddess of Wisdom and Justice, standing off against Poseidon, the great big God of the Sea! Athena and Poseidon are big rivals, always arguing and trying to out do each other. One of their famous "battles" was their contest to see which God would get the city Athens named after them. (Obviously Athena won) Each of them was to present a gift to the people of Athens and the people would name their city after the God with the best gift. Poseidon gave them a spring of seawater, and Athena gave them an olive tree. The people decided the olive tree was more useful and a better gift so the Athena became their patron Goddess (of awesomness ;) ).
Posted by fylisfe at 9:51 PM 4 comments: 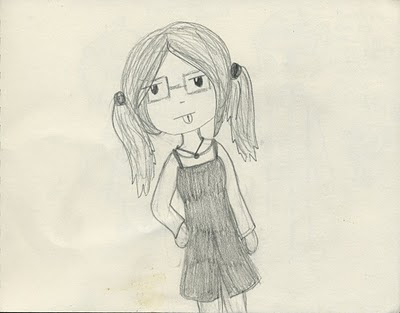 This is me.
I am bored.
I haven't done anything the past week.
I had vacation.
I was lazy.
This is me,
being bored.
Posted by fylisfe at 5:53 PM No comments: